Dinky Toys first Shado 2 Mobile was produced in 1971 just after the the TV release of U.F.O. hit the viewing public. As usual for a Gerry Anderson production the shows were full of fantastic yet believable machines helping Earth defend itself from dastardly aliens.

Some of the most popular vehicles were the Shado mobiles, tank like tracked vehicles that were the first line of defence when the critters landed on Earth.  Dinky’s first version was strangely issued in olive green which made it look more like a tank but sadly was somewhat inaccurate as the vehicles should have been painted a light grey-blue. 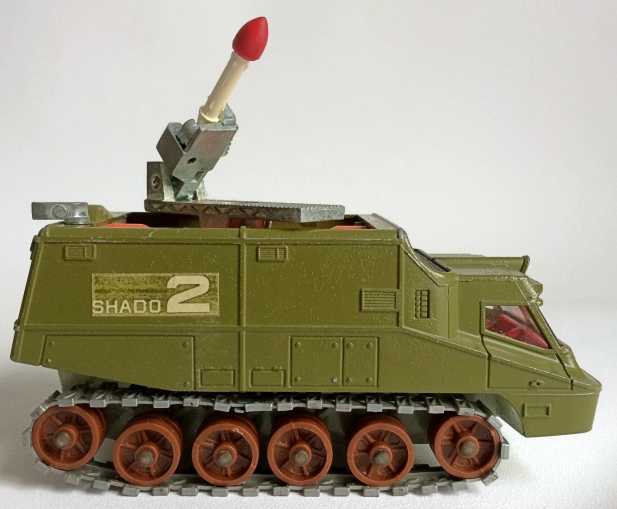 One assumes that the powers that be thought that the military colour would help sales long after the series finished and they were probably right.

But in 1978 there was a change of heart or a lack of matt-green paint and the Shado 2 was produced in a dark metallic blue.

By now the Dinky factory was in steep decline and the model lasted only a year or two and thus are quite rare. By the very end of the run even the stickers had run out as had the dark metallic blue paint so there are a few models out there with a lighter metallic blue colour and no stickers. These are probably the rarest version. This model also has a green base and black wheels which is another unusual combination.

And what might have been? I leave you with a Code 3 model of the Dinky 353 that would probably have made the shelves if sold today…