Dinky Toys 102 Joe’s Car was produced between 1969 and 1976 and was based on the vehicle used in Gerry Anderson’s Joe 90 TV series. Dinky 108 Sam’s Car from the same TV series was also released.

The key feature of this model was the flashing turbine driven rocket exhaust. This was powered by an AA 1.5 volt battery which activated a flashing bulb which utilised a bi-metal strip to create the effect. Many modern bulb replacements do not have this strip and the light therefore does not flash.

Joe’s car is really a misnomer as it was designed and mostly driven by Mac his adoptive father. Professor Ian McClaine’s (‘Mac’) Jet Air Car was a car built by himself to his own specifications. Its lack of ascetic design and unusual appearance is explained by the fact that, as a typical ‘Professor’, Mac concentrated on performance rather than looks.

With its turbo driven aero engines it could fly at 300mph, sail as a hovercraft at 70 knots or drive on land at 200mph. The car had retractable wings and fins as well as wheels.

The vehicle used a special high octane essence for fuel and was powered by two jet engines.

The Dinky model is a good replica of the TV series prop as designed by Century 21’s Derek Meddings. Towards the end of the video below there is a section on the actual model used in the TV series.

The first version had chrome engines, white markings on the top and bottom of the rear fins, the connecting rod for the rear fins had a pipe cover on the front portion covering the bare metal rod and finally it had the licensing text on the bottom.

Later variants of this version could omit the white paint on the top or bottom of the rear fin or from both sides and remove the front covering of the metal rod. The licensing text also disappeared on these later variants.

There was one additional version.  The later and possibly last version, discarded the chrome finish on the engines leaving translucent red engines.  The red engine version probably always had no white detailing on the rear fins.

During the production run there were additional changes to the licensing text, battery switch info and model number text.

Licensing text: Whilst the TV programmes were being made under the auspices of ATV (Associated Television, Lew Grade’s company) the licensing text was visible. This drops off for later models, and for all other Gerry Anderson Dinky models at around the same time.

The licensing text changes slightly, when the word ‘from’ was replaced by ‘for’. The meaning therefore changes but it’s unclear why.

On/Off text: A stranger variation was the lack of on/off labelling on the light switch at the base of the 102. This has been seen on the early/first version with the pipe cover with the licensing text and on the version that has no ‘pipe cover’ on the metal rod operating the tail wings. Logic would suggest that this would have been on the first batch of the first version and then updated but apparently not, so it might be an error?

The all-red engine, the last version:

A version has turned up with no chrome finish to the wheel legs or the connecting rods to the tail planes.

There is a 102 Joe’s car with a gunmetal base. The model featured is one of three bought by Chris Turner in 1980 from a shop in Rimini, Italy.  This is a very rare variant, possibly an export only version.

The licensing text is present so it is an early model and came in the original all cardboard box.

The earliest version had an all cardboard box with an inner tray. 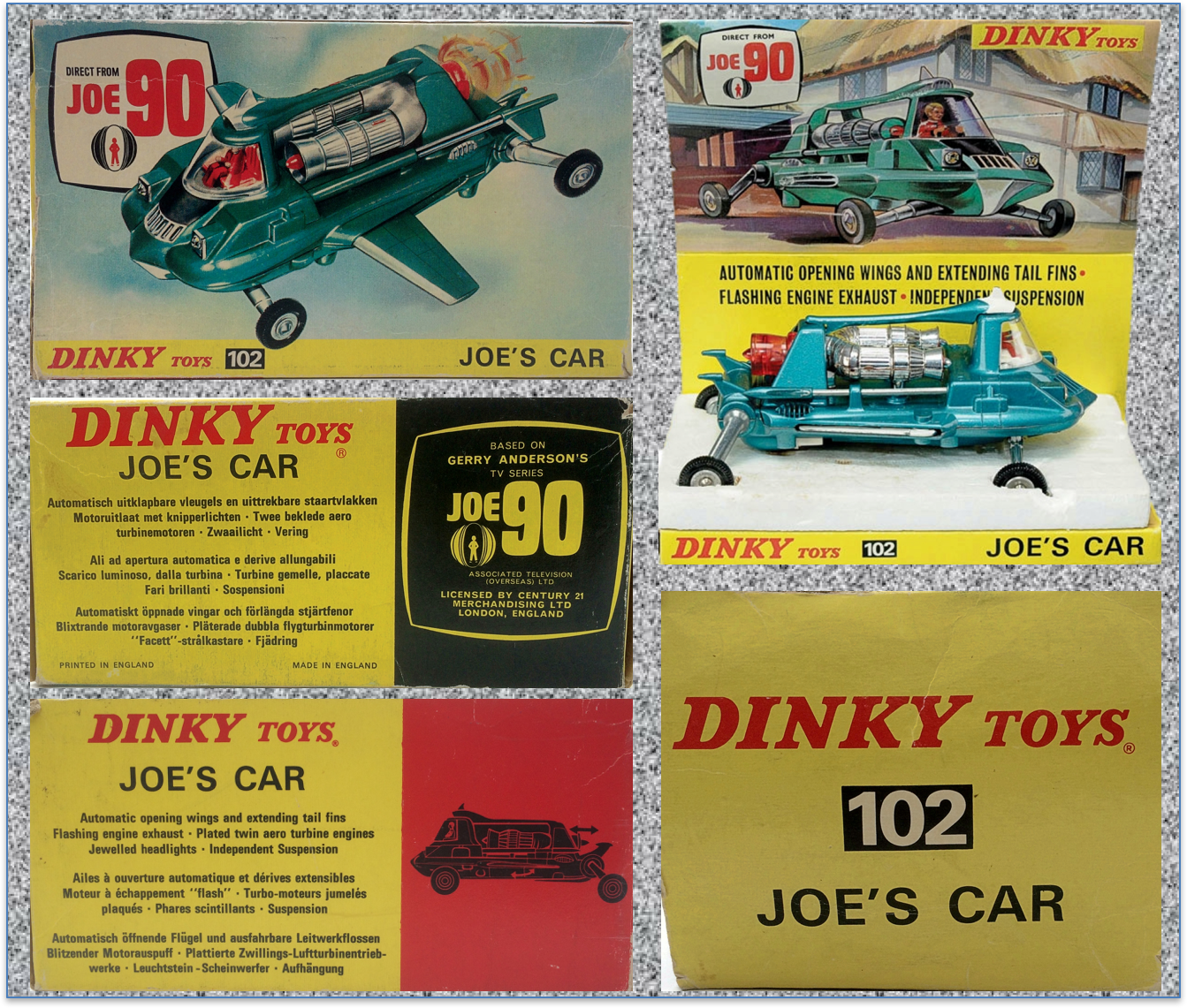 With the model was polystyrene base that helped support the plinth bottom, a foam insert and instructions.

The last models were released with a bubble and tray box.

Joe’s Car made the front page of the 1969 catalogue, the year of its release.

The 1975 catalogue showed the last version of the model which had red engines.