The Trident Starfighter was released in December 1978 to fill the appetite for Space toys and was introduced in the 1979 catalogue and then produced until the factory closure later that year.

The model had one firing ‘Stellar’ missile at the nose, the two missiles on the wing tip were dummies, presumably to keep the cost down. In addition there was a drop down stairway that also served as the front leg. Three spare missiles were provided loose in the box. 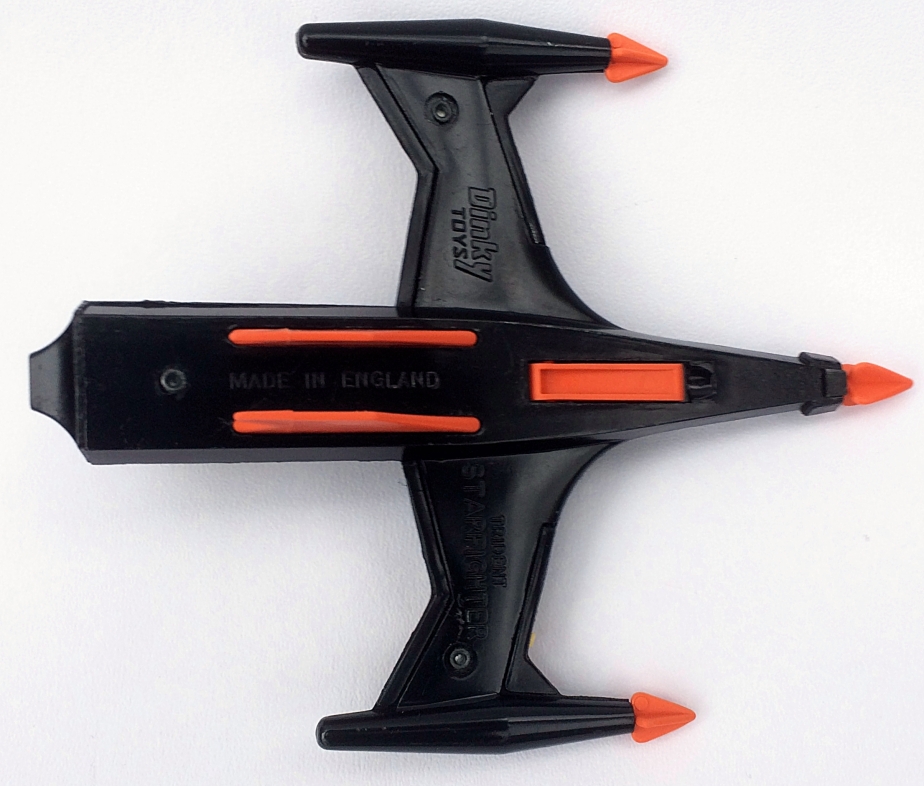 There were no known commercially available variations.

A pre-production version was sold by Vectis Auctions. Note the different wing and tail stickers

A resin prototype sold at auction in 2017.

A rare gold version of  the 362 Trident Star Fighter was especially produced to commemorate The Airfix Group dinner dance at the London Hilton on 18th September 1979. The orange plastic steps, missiles and legs were now black.

The box had a white sticker affixed to the front signed by Ray McNeice, the last Managing Director of Meccano Ltd. Note: Airfix owned Meccano who owned Dinky!

The Binns Road factory was closed a few weeks later on the 29th November 1979.

The model came in a Window Box with some excellent cover art on the rear and on the insert. The earlier version box had a ‘Trident Starfighter with firing stellar missile’ text on the bottom right as well as notifying customers about the instruction leaflet inside. The later box version had the firing and safety instructions on the bottom of the box, with text advising this,  and just a ‘with firing stellar missile’ text on the front of the box. Early boxes came with a separate instruction sheet but this was removed and replaced with printed instructions on the bottom of the box.

The model was attached to the polystyrene inner with elastic bands.

The 1978 UK Trade Catalogue shows a green ‘Trident Space Fighter’ which was renamed as the Trident Starfighter on release.

The 1978 consumer catalogue showed the Trident Starfighter in its correct colour.