The 602 Armoured Command Car was one of two vehicles that were originally based on props used in Gerry Anderson’s The Investigator. The series, produced in 1973, got as far as a pilot but was never transmitted on TV.

The Armoured Command Car production dates were 1976 to 1977 although the model appeared in the trade catalogue of 1978.

The box boasted a ‘Power operated tracer and scanner’ but pointed out in much smaller print that the ‘Road wheels were NOT mechanically driven’. In fact the features were pretty impressive: By winding the clockwork motor, which according to the box was ‘made in Japan’, a flint wheel was operated that rubbed against a flint causing sparks to fly out of the front. This was presumably to create the impression of a rapid firing machine gun. It certainly looked the part in the dark. Replacement flints could be borrowed from Dad’s cigarette lighter spares.

There was also a towing hook and the cord across the bonnet was a ‘detachable towing strap’, hence why these are often missing from the models today.

Reg Hill, rather than Gerry Anderson as stated on the box,  designed the Investigator Car as transport for agents John and Julie, special agents of the mysterious alien ‘The Investigator, who were tasked to make the world a better place by fighting criminals. For some strange reason they were shrunk to a third of their size so the prop is much smaller than life size.

In the series ‘John’ and Julie’ are marionettes, aka Thunderbirds etc, but significantly larger, The model was radio controlled and apparently very temperamental.

The released military version retains the shape and basic features of the original but the accessories are replaced by military hardware and the colour scheme changed from red to green. There are a few Code 3 versions which more accurately portray the actual prop.

When the TV series was cancelled in 1973, Dinky had jumped the gun and had designed and produced tools for both the car and the boat that were to feature in the TV Series. In order to recoup costs and save money, three years later in 1976, the designs and the dies were dusted off and used to create a new military model, this genre being very popular at the time, and the 602 Armoured Command Car was born.

Parts and decals were raided from existing military vehicles to dress the model, although it’s assumed the spark firing mechanism was planned for the non-military version, other wise it would have been a very dull toy. Assuming the driver is the correct size then the Jerry Cans at the back are way out of scale!

There were clues left to the original identity inside the car and externally invisible. ‘Investigator Car’ and ‘INV CAR’ markings are clearly visible.

There is only one variation known to exist in its short life time and this was an olive green version.

Purchased from a reputable auction site, with the aerial sellotaped to the bottom of the model. It was too thick to bend to fit in the box. The other aerial types were thinner and tapered and the toy was put in the box with the aerial fitted and are almost always curved as a result. The aerial fits the hole perfectly.

A prototype pre-production colour trial, featuring a yellow body, white half-roof, red seats and cast rather than plastic wheels  was auctioned by Vectis in 2018. Note that the base of the production model (in green) says ‘Armoured Command Car’ whereas the prototype states ‘Investigator Car’ and was in metal rather than the production version’s plastic. The flint holder at the front is probably just missing but the on/off lever is longer on the prototype 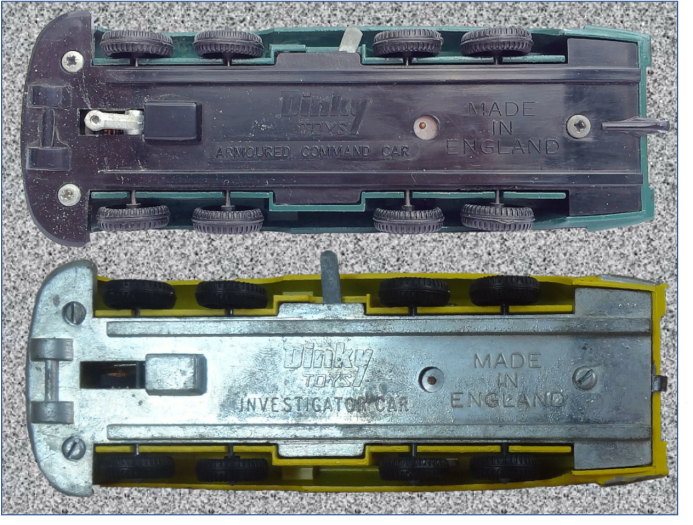 Dinky had experimented with producing all plastic models, including the Armoured Command Car,  to save costs. The 103 Spectrum Patrol Car and 106 Thunderbird 2 were also trialled.

A few of these versions appear at auction from time to time. The actual production model did in fact have a plastic baseplate.

The Armoured Command Car appeared in the 1976 catalogue, the year when it was first produced.

The final appearance was in the 1978 trade catalogue where the model changes from military green to white as does the 353 Shado 2. Perhaps there was a paint shortage or maybe this was a makeover. Neither vehicle was made commercially available in this colour.