Neither the 113 Steed’s Jaguar Coupe car nor the Gift Set 307 ‘New Avengers’ both from the TV Series The New Avengers  ever reached the production line, although the 112 Purdey’s TR7 from the same series, was produced in 1978, possibly because it was just a repaint and rebadge of an existing model.

Steed’s car was to have been produced by Lintoy in Hong Kong, the Binns Road factory being well on the way to closure and the management were seeking to cut costs. However it appears that Lintoy were not paid or not paid enough so very few were actually produced for Dinky.  In addition it was probable that The New Avengers set & the Jaguar wouldn’t have sold particularly well as the last episode had aired in the UK in December 1977 and the series was nowhere near as successful as its predecessor.

Some of the prototypes however have survived.

Genuine models are very hard to come by and command exorbitantly high prices, a recent authenticated model being sold for £5,400 at Vectis Auctions.

The cardboard boxes for these models would probably have come from Dinky but Lintoy also sold a version on a card with a factory sealed blister pack. One of these was sold for £3,000. The text reads Dinky Toy rather than Dinky Toys and similar packaging was used for the 361 War Chariot and the 219 Big Cat Jaguar.

The following Steed cars are also believed to be the real thing.

Below. Dinky 113 Steed’s Jaguar Coupe. An authentic prototype item from the Dinky factory, with provenance. Sold initially by Christie’s and then by QDT.

The model was planned to come with a ‘criminal’ who would be flung off the car as it moved away. There is no evidence of any mechanical or spring loaded mechanism to do this and it’s possible the action relied on the figure having uneven legs.

It should be noted though that here are significant number of code 3s based on the #219 (Jaguar) Big Cat which were also being produced about this time at the Lintoy factory. These were made in their thousands either blister carded or wrapped in bubble wrap.

So purchasing a genuine 113 is fraught with danger! And expert advice via Michael77 from Planet Diecast suggests:

It should contain a plastic steed figure at the wheel, these are yellow and painted grey with light pink on the face and badly moulded hands, secondly the glazing unit should have a number 2 stamped  into it and at the back of the casting on the rear spoiler just above the right rear light cluster and thirdly on the inside the peg that holds the glazing unit in place is much shorter than production versions and it doesn’t have a retaining ring that holds the glazing to the casting

All the models and boxes below are code 3’s.

John Steed drove a number of cars on The New Avengers TV Series. including a green XCJ12 C , a road going replica of the Broadspeed Jaguar wide-body race car.

The Dinky 113 is blue rather than green, although the earliest catalogue picture was in that colour.

A resin/wood prototype model was made prior to creating the first pre-production models.

A resin prototype was sold by JK Auctions in August 2019, it had been in the Parodi collection. The Parodi family were the sole importers of Dinky Toys for Italy and acquired a massive collection of Dinky Toys including prototypes.

There were only a handful of window boxes made for the prototype models and these are very rare. The blister card was produced by Lintoy in Hong Kong after the Binns Road closure. The tall bubble box is always a code 3 as this box type was phased out before the 113 was ever produced.

The Gift Set 307 was also never commercially produced although its made its way into the trade and consumer catalogues. Note how the 112 Purdey’s TR7 front bonnet decal changes.

Although featured as ‘coming soon’ in the 1977 trade catalogue and the in the 1978 consumer catalogue, John Steed’s jag never made to the shop shelves. 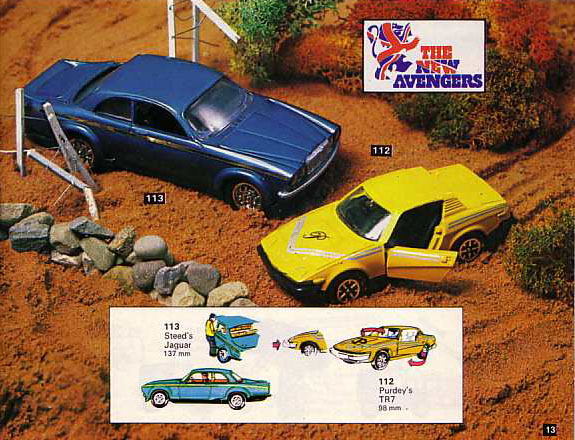