The UFO Interceptor produced in 1971 was the first of three models from the U.F.O. TV series, the others being the 352 Ed Straker’s Car and 353 SHADO 2 Mobile.

Although an reasonably accurate physical version of the TV model, unfortunately it was produced in a green colour, rather than the white of the the actual Interceptor used in the TV series.

The best feature by far was the ‘nuclear missile’ on the front. This was activated by releasing a spring loaded lever on the bottom of the model which could also be fitted with an exploding cap that produced a satisfying bang as the missile shot out. These caps were usually used in toy guns but could be inserted singly behind the missile

This was a Gerry and Sylvia Anderson production for Century 21. The U.F.O. TV series premise was that a secret organisation called SHADO.

The Supreme Headquarters Alien Defence Organisation were defending Earth against alien invaders.  SHADO Interceptors were red and white space fighters used to defend Earth against these marauding hordes of aliens and were equipped only with a single nuclear missile as a weapon. Usually they flew in groups of three taking off from SHADO’s moon base.

Apart from the colour, the Dinky model is a close and faithful representation of the model craft used in the TV Series. The original prop was designed by Mike Trim and Derek Meddings.

There is a disagreement between some experts about which was the first version produced.  It’s either the red legged or the orange legged version.

The evidence to support the orange legged version as the original issue is based on the red pilot, which was from an existing model, the 102 Joe 90 car, and was only ever used in one Interceptor version, the other versions all using a grey-green pilot also used in the 722 Harrier and other aircraft models. In the May 1971 Meccano Magazine, the launch of the model is featured the ‘Dinky News’ section and is described as having orange legs. The red legged version is rare which implies that Dinky ran out of red legs and red detailing early on in the production cycle which is unusual for a first production run. Red detailing inserts are also seen on orange legged versions and vice versa which suggests that ‘red’ plastic supplies were available for a long time.

The evidence to support red legs as the original model is the red legged version being sold in a plain cardboard box dated 1971, the first year of manufacturing, and interestingly with a red plastic details with no chrome paint,  alongside the red legs, (see Oddities and Rarities below). These are similar to the last ever versions but those were made with orange plastic detailing.

There were at least 9 parts that were changed or modified over the 9 years the Interceptor was in production. The final version, in line with many other models at the end of the factory’s life, cut costs wherever possible. In the case of this model the brass coloured paint details and the chrome finish were dropped.

The most numerous version had orange legs and has many variants, including cockpit colours and pilots and as the production came to an end the removal of the chrome detail finish, as well as the bronze detailing, leaving a significant amount of orange plastic in view.

Some of the red version variations are illustrated below. There is a red ‘Joe 90’ pilot variant and this has orange detailing and red legs. All red versions are the rarest, although the red detailing is usually under a chrome finish.

The model below is an interesting black nosed hybrid, from Matthew in NZ, of red plastic legs but underneath the chrome detailing is orange plastic. The SHADO labels are a yellowish-orange colour rather than the usual deep orange. 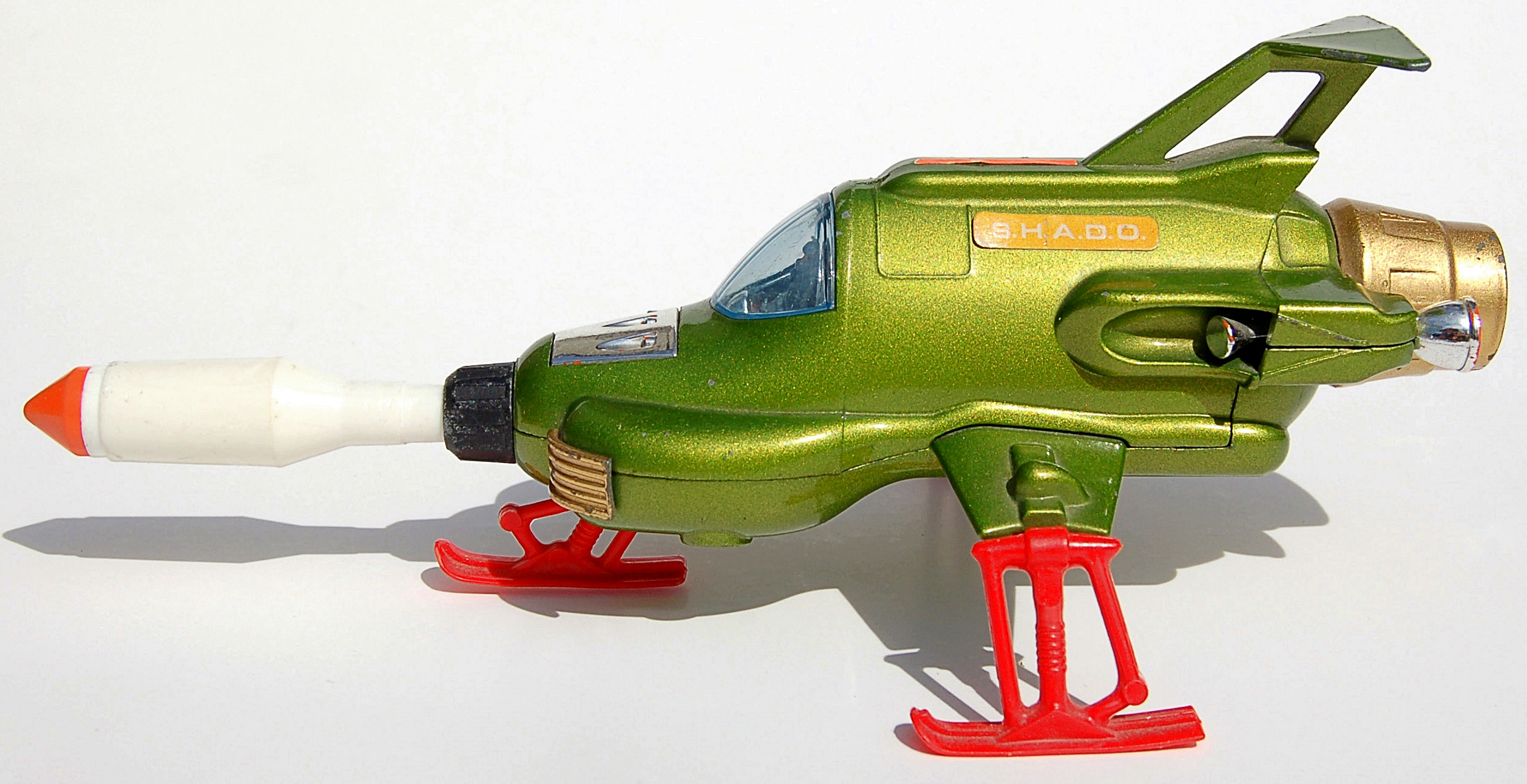 The Interceptor production run encapsulated three box types, the cardboard with inner tray, the bubble pack and the window box.

The first box was all cardboard with an inner tray with excellent artwork although the interceptor depicted was white and red, as in the TV series, rather than the green of the actual model.

The inner tray had two pieces as well as a packing piece. The back of the main tray usually came with a warning notice but some were plain.

Instructions were included in the first box type.

The second type of box was the bubble tray, which could have a blue or a less seen white base. There were also two fonts used on the blue base version.

The final box version was the hanging window box type.

There are three descriptions of  a 351 Interceptor model sold at Christies Auctioneers in 2002.

(2) The white Interceptor is not a master model. The master models are usually two or three times the size of the finished product. So far only three Dinky Toys master models are known to have been saved : the Renault 16, the Opel Rekord 1900 and the Super Mystère fighter (not issued). The large Interceptor is probably an evaluation mock-up which was found to be too big and it was then decided to make the production models to a smaller scale. (Source: Jacques Du Jardin, Dinky Encyclopedia)

(3) And finally this model was originally a studio prop. (If anyone knows the original source magazine please advise)

This No.351 Interceptor finished in green with red legs and blue tinted windows was packaged with an unusual mail order plain box and inner packing card. This was due to a shortage of interceptor boxes. There was an enclosed leaflet stating why this was necessary and it was signed Meccano 1971. Sold by Vectis Auctions.

The 351 Interceptor made the front cover of the 1971 catalogue in its year of release.

In 1972 all 3 of the UFO TV series model appeared together at the same time.

The 1973 catalogue has a red legged, black nosed version on show. It also appears to have rocket with a red tip which is very rare, if ever commercially made available.

The 351 featured again on the front cover of the 1978 catalogue. Note that the trailing edges of the landing skis appear to be raised.

The final appearance was in the 1979 trade catalogue and separated away from its sister model the 353 SHADO 2 Mobile which appears on a different page.

A window display from around 1972.