Two models were released in 1975, the 359 Eagle Transporter and the 360 Eagle Freighter. Both of these models were licensed from Gerry and Sylvia Anderson’s TV production Space:1999,  a UK science fiction television series that originally aired from 1975 to 1977. The Eagles shared the same chassis and differed only in colour and the detachable payloads.

The Eagle Transporter carried a laboratory module pod underneath its chassis which could be released and it also had opening doors.

The Eagle was designed by Brian Johnson who had worked with Gerry Anderson on Thunderbirds in the mid-1960s and had then produced the spacecraft for the 1968 film 2001: A Space Odyssey.

Various types of module could be attached to the Eagles including

Apart from the typically inaccurate Dinky colour scheme, the model was a pretty good copy of the actual prop.

There were two main variants of the Eagle Transporter.

The first model released had yellow side thrusters and chrome main thrusters with red engines.

Underneath the first version’s chrome paint on the rear and underbelly thrusters the plastic base could be yellow or red. The yellow plastic variant was probably the original. Note also that the 360 Eagle Freighter had chrome engines with red plastic underneath so this could simply be parts that could be used on both models.

The second and more common version had red side thrusters with red unpainted plastic engines and metal thrusters.

Other variations to the core chassis were an additional support strut at the front and back of the white girder chassis top, a blanking type panel on the green chassis underbelly, front and rear, and a reinforcing strut on the leg supports.

The original name for the Eagles in the series’ prospectus and the draft script  was MTU, or Modular Transportation Unit. Functional but dull! Eagles were a much better name for the TV progs and the Dinky models. If you look inside the crosspiece joining the two front legs there is  the text ‘MTU’, presumably because when Dinky got the designs from the production company, that’s what they were called.

The lab module window plastic was initially red but later there were orange and clear variations. Red stickers were supplied so the Transporter could be converted into a Rescue Eagle which carried a medical lab. The 359 Eagle Transporter, according to the vast majority of experts, was never issued commercially in an all white livery. The model above is a combination of the white 360 Eagle Freighter and the lab module from the Eagle 359 Transporter. It’s quite possible that shopkeepers would swap around the modules on request as colour-wise its the most accurate representation of he real thing.

A 32 part Eagle Transporter and Freighter kit, similar to other metal Dinky Kits available at the time, was proposed, but not commercially released.

In kit form and unpainted, it would have contained a  single Eagle chassis but with both the transporter  lab module and the freighter container pod. All that appears to survive today is the artwork for the box labelled under the Dinky Die Cast Toymaker brand. The serial number was to be 1035, but this was allocated to the Striker Anti- Tank Vehicle kit in 1975 so making this was seemingly a very short lived project.

The Eagle Transporters were initially packed in a bubble box, firstly with a blue base and then with a yellow base. The artwork and some fonts also changed with this transition.

After the bubble box there was a hanging window box with a polystyrene lunar interior. On the front it featured two actors from the series, Martin Landau (Commander John Koenig) and Barbara Bain (Dr Helena Russell) and on the back a contrived mission featuring the 353 Shado 2, the 351 Shado Interceptor and the 106 Thunderbird 2.

The final box was similar but with a plain yellow interior replacing the lunar landscape.

The Eagle Transporter made it to the front cover in its 1975 launch year albeit in an all white livery and with the emergency decals applied. 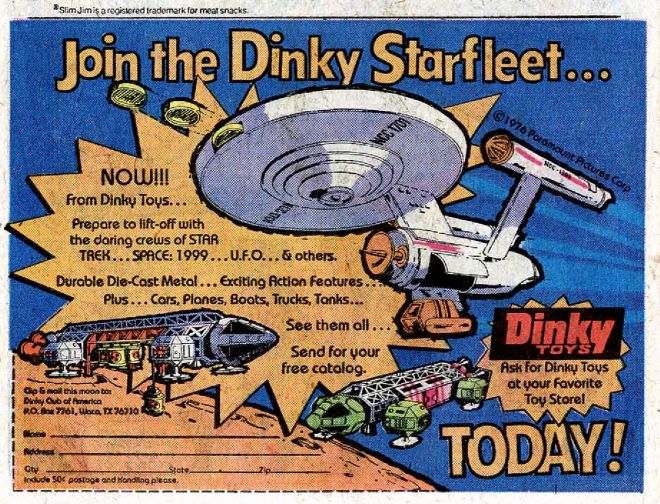