The Dinky Beats model appeared in 1965 as the Beatles were topping the charts. Of course there wasn’t a direct link to the group as that would have incurred a licence fee payment. The three mop haired guitar playing figures driving in a ‘FAB’ labelled car were a tribute to the group and others of a similar ilk, such as the Kinks. Note the labels FAB and Kinky.

The Meccano Magazine (June 1965) explained “It had to happen! With Meccano Limited being based in Liverpool and Liverpool being the centre of the current ‘beat’ music craze, it was only a matter of time before Dinky models became involved with the ‘Mersey sound”

The 486 model was dissimilar enough to prevent any awkward licencing questions.

This was the second, novelty/special model produced by Dinky. The lilac and light green colour scheme were a sign of the times as were the ‘hip’ slogans covering the car. The figures were not terribly life like and were crudely painted by hand, with the rear figure precariously perched on the soft top roof. The car was ‘packed with features’ according to the box and included a ‘Beat’ group with instruments, Beat slogans, Opening boot, Brass radiator, Lamps,Windscreen frame and Window and finally Spoked wheels. Not quite a 100 FAB1 but it was a start. In 1970 when production of this car was ended another special was created from the same chassis, the 477 Parsley’s Car.

The Dinky Beats car came in a rarer dark blue chassis version which was similar to the original 485 Morris Oxford. 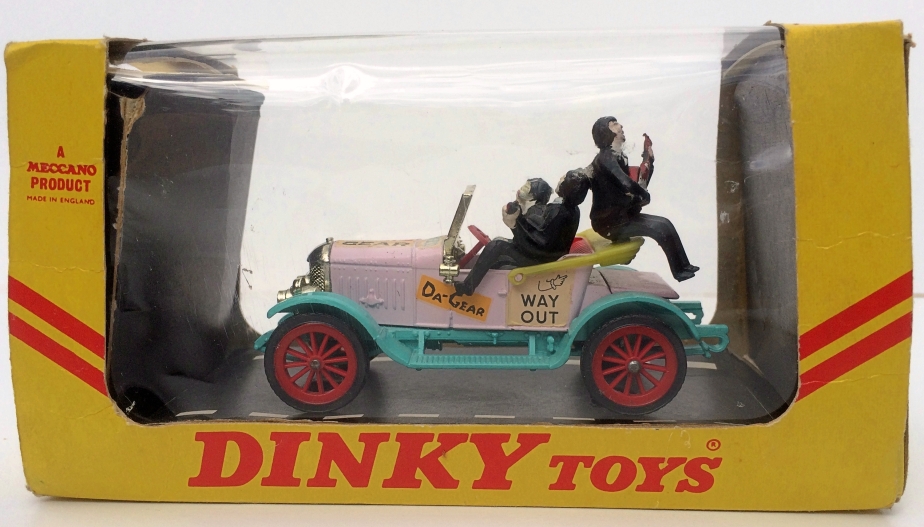